The “Apple Book” is one part of a larger story of continuing ties between Maldon, Victoria and Maldon, Essex in the UK. This particular chapter in the story came about after the Second World War when food was rationed and fresh food was particularly scarce. ‘Food parcels’ were often sent from other countries  and the Maldon District community’s shipment of apples was most welcome. Read The story behind the “Apple Book” below for more details.

The “Apple Book” is a 54 page hand-made portfolio containing letters, photographs and drawings created by the teachers and pupils at Maldon County Primary School, Wantz Road, Maldon, Essex in 1949 for presentation to the pupils at our Maldon Primary School in appreciation of the gift of apples. 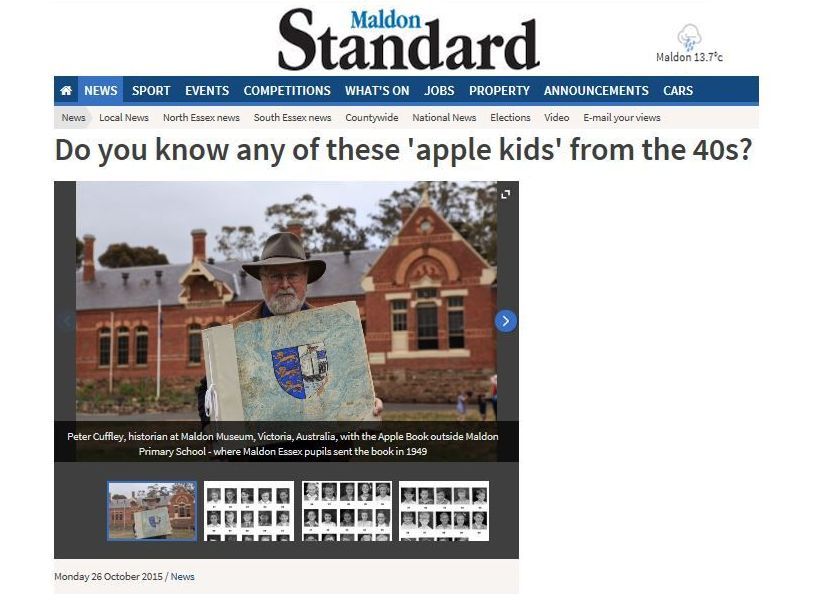 You can read the articles in the Maldon Standard here: October 2015 and December 2015

The original contents of the “Apple Book” are listed below. Some of the original items had been damaged or disassociated from the book prior to its receipt by Maldon Museum & Archives Association. 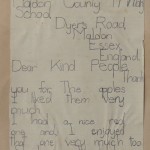 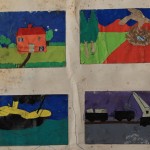 The story behind the “Apple Book”

In the years immediately following World War II, people in Britain had to live with severe shortages of all kinds of daily needs. Until the outbreak of war, local production of fruit, vegetables and meat had been supplemented by importation of produce from countries such as Australia and New Zealand. Once the war started, transporting goods by ship became difficult and dangerous. It is hard to imagine apples being both scarce and expensive in the late 1940s in a mostly rural county such as Essex.

Harcourt orchardist and Shire of Maldon Councillor, Albert Edwin ‘Bert’ Wood, came up with a plan to strengthen the already existing ties between Maldon, Victoria, and Maldon, Essex, by sending a shipment of apples to the school children there. He was a Londoner by birth and had migrated to Victoria in 1911. In March, 1916, he enlisted in the Australian Army and became a private in the 29th Battalion. After serving in France, he returned to Victoria and having purchased land at North Harcourt, planted an orchard of apples and pears.

With the shared involvement in saving Britain from invasion in World War II, people in Australia felt a strong loyalty and kinship with the ‘mother country’. Many citizens of the Shire of Maldon were from the British Isles, or had parents or grandparents who were born there.

Shire President, Bert Wood, led the campaign to send 200 cases of apples to the children of Maldon, Essex. The appeal to raise around a hundred pounds for the freight was promoted and reported in the Tarrangower Times. To get an idea of the present day value of a hundred pounds (£100), the average weekly wage in Australia in 1949 was close to ten pounds (£10), while the current average is more than a $1000 per week. In the end the freight was £106, with the apples valued at £200.

With enough for the freight raised, 200 cases of apples were duly shipped to the Mayor of Maldon, Essex. The distribution of the apples involved seven schools and some 2700 school children. The formal presentation was by Victoria’s Agent General in London, Sir Norman Martin. A farmer, former shire councillor and Country Party politician, Norman Martin was knighted in 1949 for his work in promoting Victoria and for his efforts to direct Australian aid to both service people and civilians in England. Like Bert Wood, he had served in France in World War I. In 1919 he had married the English nurse who had cared for him after he was gassed at Passchendaele. She was with her husband at Maldon, Essex, on the 14th of June, 1949, the great ‘Apple Day’.

In an account of the apple distribution included in the ‘Apple Book’, we read: ‘Tuesday the 14th June, will live long in the memories of Maldon boys and girls, for during the afternoon the town was honoured with a visit from the State Agent for Victoria, Australia, Sir Norman Martin, and Lady Martin, who came to watch the distribution of apples, sent over from Maldon, Australia, to this small Essex Town. The two thousand, seven hundred children, drawn from the seven schools within the Borough of Maldon had assembled on the Playing Field facing the Secondary Schools. At half-past-two o’clock Sir Norman and Lady Martin’s car drove up, and the loud speakers heralded their arrival with appropriate music. A large platform gaily bedecked with flags had been erected on the tarmac, and when the various officials, including the Mayoress and the Managers and Governors of the seven schools, had taken their respective places, the Ceremony opened with the singing of the National Anthem. It was a very moving sight as the large gathering of children, whose ages ranged from five to sixteen years, rose for “The King”.’

A number of the schools sent letters and gifts of thanks to Maldon, Victoria, but it was the teachers and pupils at the Maldon County Primary School who worked hard to produce the 54 page ‘portfolio’ for presentation to our Maldon Primary School. When Sir Norman and Lady Martin returned to Essex in December, 1949, there was not only the ‘Apple Book’ to carry home to Victoria, there was also a large iced Christmas cake and a carved Maldon, Essex coat of arms in a frame, both made by the pupils. 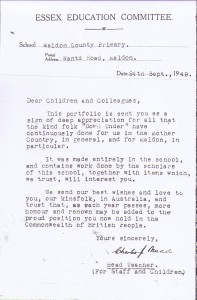 The Head Teacher of the Maldon County Primary School, Charles Mudd, had written in the introductory letter, ‘Dear Children and Colleagues, This portfolio is sent to you as a sign of deep appreciation for all that the kind folk “Down Under” have continuously done for us in the Mother Country, in general, and for Maldon, in particular. It was made entirely in the school, and contains work done by the scholars of this school, together with the items which, we trust, will interest you. We send our best wishes and love to you, our kinsfolk, in Australia, and trust that, as each year passes, more honour and renown may be added to the proud position you now hold in the Commonwealth of British people.’

It is interesting to note that the Maldon Grammar School had also prepared a thank-you album which must have arrived in Maldon, Victoria months before the Maldon County Primary School portfolio. In the Chelmsford Chronicle of the 16th of December, 1949, we read that, ‘Mr A. E. Wood, president of the Maldon Shire, Victoria, Australia, has sent a letter to Mrs Cowell of Maldon Grammar School, Essex, acknowledging the many letters of thanks for the gifts of apples.’ He also thanks the Sixth Form for the “Beautiful album of photographs of your school, staff, the churches, and the countryside of Maldon, Essex.” The fate of this album is not known. On the day of the apple distribution in June 1949, the Mayor of Maldon, Essex, Councillor Wallace Binder, was an apology as he was at that time visiting Malden, Massachusetts. Its High School had presented him with two souvenir books. One illustrated the school, its staff and pupils, the other was written by the pupils was a history of Malden over 300 years. Accepting the gifts, Mr Charles Stuart, headmaster of Maldon Grammar School said the school had already prepared a book about their school to send to Maldon, Australia, and he hoped one would be prepared for Malden, Massachusetts, ‘and so provide two links, one East and one West.’

Arriving in Melbourne on the ship ‘Himalaya’ on the 9th of February, 1950, Sir Norman and Lady Martin had the portfolio we call the ‘Apple Book’ safely amongst their luggage, along with the cake and the carved coat of arms. On the 4th of June, 1950, they attended the handover of these important gifts at Maldon Primary School. Councillor Duncan MacGregor, the Shire President, extended a civic welcome to Sir Norman and Lady Martin. Also present were Councillor Bert Wood, Councillor Harry Grigg as President of the School Council, and the Honorable C. P. Stoneham, MLA. Importantly, Alice West and Edmund Mudd, sister and brother of Charles Mudd the Head Teacher of Maldon County Primary School in Essex were in attendance, having migrated to Victoria in earlier times. Charles Towner as Head Teacher officially received the gifts.

In the report in the Tarrangower Times the 7th of June, 1950, under the heading, ‘HISTORIC FLAG’, we read that the official table was covered with a tattered Union Jack, for which Mr Towner said he had been taken to task for placing there, but he had done so because of its link 37 years ago, for printed on its binding was the inscription, “From the children of Maldon, Essex, to the children of Maldon, Victoria, 1913.”

At the end of the presentation and expressions of thanks, the children gave loud cheers for the County School in England, and for Sir Norman and Lady Martin. This was followed by a verse of ‘Waltzing Matilda’ and more cheers when the Shire President gave them a half holiday. The function concluded with ‘God Save the King.’

Dating of the artefact was straightforward as dates are noted in the correspondence within in the artefact and external to the artefact,  and in newspaper reports of the day.

Custodianship was transferred to Maldon Museum & Archives Assoc. by donation.