This iconic panoramic view of Maldon was captured from the summit of Victoria-reef Hill (Derby Hill) looking west towards Mount Tarrengower in 1867. Whilst not the earliest photograph in the Museum’s collection it is one of the most significant. It is the later of two known photographic panoramas of Maldon created in the 1860s. It was thought to be the only early panorama of the town until an additional three-plate image c1860 was unearthed in late 2018.

The original panorama measures 81cm wide by 21cm high and consists of three albumen prints skilfully mounted on card. The joins between the original prints are clearly visible. Each plate in the panorama was 10 x 12 inches (approx. 25 x 35cm), a common size at the time.

The image is historically significant in its depiction of the architecture, commerce, industry, and landscape of Maldon. It is also a fine example of the technical skills required to produce a wide image of the landscape using the ’wet plate’ process.

The photograph provides a snapshot of the commercial areas of Maldon at a time when the population of town was around 4,000 and mining of the rich quartz reefs was in full swing. Interestingly the photographer has managed to completely omit all of the large mines which were operating alongside the town’s central area and within the surrounding residential areas.

The industrial activities of Tobin Street are clearly visible in the foreground and the entire central commercial area from Spring Street in the south to Templeton Street in the north has been captured.

Many of the buildings visible in this image remain, and are readily identifiable today. 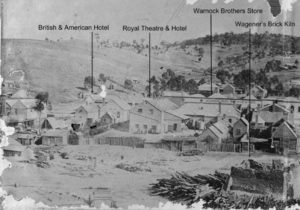 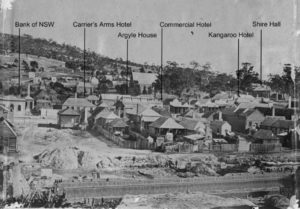 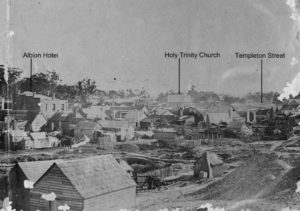 The photographer was one Mr. Armstrong, a travelling photographer who visited Maldon during late April and early May 1867 (Tarrangower Times, 26 April 1867 and 3 May 1867). He visited other central Victorian goldfields towns during that year including Avoca in February (The Avoca Mail, 23 February 1867), Tarnagulla in June (Tarnagulla Courier, 8 June 1867), and Sebastopol in October (Ballarat Star, 22 October 1867).

His later movements have been tracked to Newcastle, NSW (Newcastle Chronicle, 12 May 1870) and then back to Tarnagulla (Tarnagulla Courier, 21 September 1872).

Mr Armstrong’s advertisement in the Tarrangower Times of 26 April 1867 claimed he had taken town views for various Shire and Borough Councils for the Intercolonial and International Exhibitions, although to date our research has not been able to confirm this claim. He described himself as a ‘photographic artist’ specialising in large views and portraits. 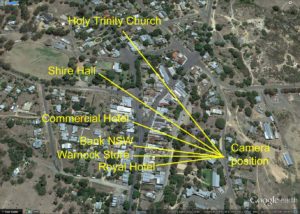 The likely camera position has been determined by taking sight lines from prominent buildings in the panorama and overlaying them on a satellite image of Maldon.

The point where these lines converge is a small car park in Phoenix Street at a position now known as Derby Hill.

Tree growth in the area over the intervening years means that the town can no longer be readily viewed from this point.

Dating of the artefact has been a matter of research and deduction. It is likely that the negatives were created around 10am on Monday 29th April 1867 and support for this choice comes from several sources.

This date falls between Mr Armstrong’s advertisement on 26 April and a press report hailing his panoramic landscape. The glowing report states that the image, inspected on the Wednesday prior, is ‘a full view of Maldon … the distinctness with which the Mount and other objects of interest were brought out exceeds anything we have yet seen’ (Tarrangower Times, 3 May 1867).

Laundry drying on lines at rear of Main Street properties

Further thought on dating comes from the presence of washing blowing in the wind on lines behind Main Street; Monday being the traditional washing day. 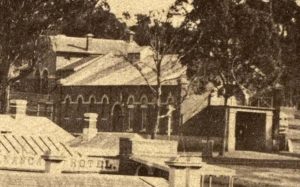 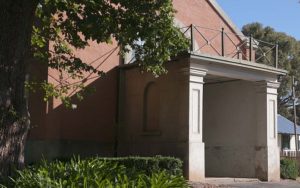 The time of day was determined by studying the shadows cast by the portico and balcony railing on the eastern façade of the former Shire Hall and comparing them with recent photographs.

In addition, weather reports from the Bendigo recording station (the nearest to Maldon in 1867) reveal no rainfall between 19 April and 2 May 1867, thus the sun may well have been shining on 29 April 1867.

This burst of activity and praise was enough for the local paper to remind its readers to be loyal to the local resident photographers, Mr Hannay Sen., and Mr J G Moon as their work was as good as ‘the best of Melbourne photographers’ (Tarrangower Times, 12 July 1867). The Maldon District Museum holds several original prints produced by Mr Hannay and digital copies of works by Mr Moon.

A short while later it was advertised that Mr J G Moon had ‘purchased the entire splendid outfit of cameras and lenses from Mr Armstrong, [and was] now prepared to receive orders …’ (Tarrangower Times, 26 July 1867).

Early photographic landscapes are an invaluable and relatively rare resource today due to the effort required for their production and their fragility. Prior to the advent of landscape photography an artist’s skill was required to capture a scene.

Photography’s combination of science and art has proven to be irresistible. By the 1890s, thanks to Eastman Kodak, anyone could be a photographer. Now in 2017 it seems everyone is a photographer and developments continue apace.

Custodianship rests with Maldon Museum & Archives Association. Research to date has failed to uncover any mention of the Shire of Maldon, or anyone else in Maldon, acquiring a copy. Thus the provenance of the Museum’s copy remains unknown.