Next tasks for the tradies – reinstall the skirting boards and paint them, clean the floors, and move the cabinets back into position. Then it’s the volunteers’ turn to unpack the artefacts and re-establish the displays. We are also assessing what is required for reopening in line with the COVID-19 restrictions and look forward to having visitors back onsite as soon as feasible.

The bulk of the painting has now been completed. The north and west walls were completely repainted and match the existing paintwork beautifully. 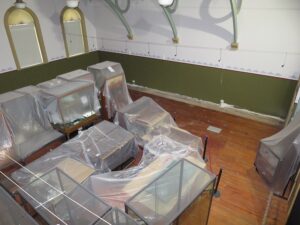 Freshly painted west and north walls. So nice to see.

Two coats of plaster have now been applied. The walls already look much better and are now ready to be painted. It’s amazing to consider how little mess was generated from buckets of wet plaster being applied to the walls, including several patches up near the ceiling many metres from the floor level. All that and no dust from sanding. 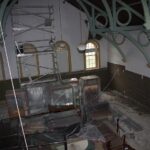 The first coat of plaster started to improve the appearance of the walls. 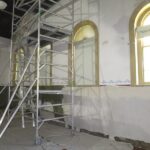 And the second coat looked ‘perfect’.

Here we are almost five years after the project started and the walls have at last been deemed dry enough to re-plaster and re-paint. We know the preparation routine well now – empty the display cabinets, pack all the artefacts, remove the items from the walls, call in the moving people, and cover everything prior to the tradies arrival. We anticipate that it will be up to 8 weeks from packing until unpacking so hope to be ready to reopen by the end of June, COVID-19 restrictions permitting of course.

Empty cabinets neatly set to one side of the hall

And now with protective plastic covers in place.

Fortunately the Maldon District Museum will be opening again from 16 January 2016. The information below has been retained as a brief history of the building works which occurred during 2015.

Update as at 1 December 2015: Unfortunately the Maldon Museum has been CLOSED to the public since Saturday 11th July 2015 due to works underway to address the rising and falling damp present within the exterior walls of the building. We hope to be able to re-open around mid to late December 2015 (latest estimate). The History Research Centre continues to be open on Fridays 10am to 2pm as usual.

Update as at 1 November 2015: No further works are planned for the interior but we are currently waiting on the building’s manager to send in the cleaners and removalists to get us back to a point where we can reassemble the displays. The whole process has taken much longer than anticipated and we are beginning to wonder if things will ever be back to ‘normal’. In the meantime work has been proceeding on the exterior of the building to address problems with flashing and masonry on the east and west end parapets. When this is completed drainage works on all sides of the building will be carried out. 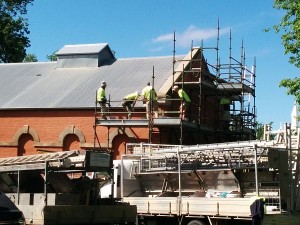 The west end of Museum hall with scaffolding and workers galore. 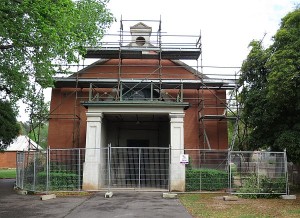 The east end of Museum building ready for action on the parapet and thereabouts.

Update as at 24 September 2015: The sections of damp damaged plaster on the west and north walls have now been removed. The builders have left a remarkably neat result under the circumstances which should not be too difficult to work with when we are finally allowed back into our space. As expected everything is covered in fine plaster dust, however from the little we have been able to check so far our wrapping has done what it was supposed to do and is nicely coated in dust. We are not looking forward to the unwrapping process but it will be great to have our exhibition back in place . Barring unforeseen events, we hope to reopen to the public by the end of October. 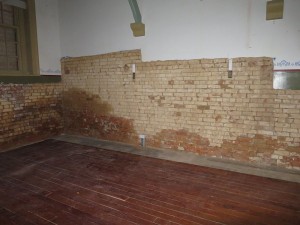 The north wall with its damp brick work now exposed. 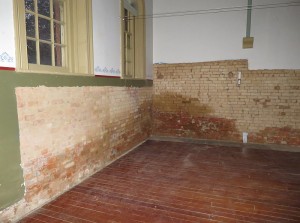 The north west corner of our building which is where most of the damp penetration had occurred.

At least now we know what is under all those nasty plaster ‘bubbles’ visible in the image below. We have no estimate of the drying time as yet so will try to be patient and let nature take its course.

Update as at 30 August 2015: The works project is to repair flashing between the roof and parapet, correct drainage problems around the building, and remove damp affected solid plaster from the lower areas of the interior side of the walls and two corners at ceiling height. This work will be done by hand to minimise the risk to the structure and to limit the spread of dust and debris around the hall. Some of the work on the roof has been completed and work on the interior is waiting on further input from the project’s heritage architect so we currently don’t have a date for the commencement of this work. 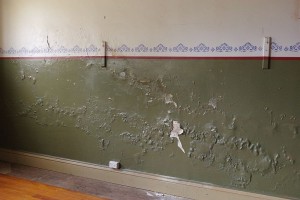 When work eventually commences on the interior we expect the hall to be ‘up to its ears’ in mess, thus we have packed and moved, and covered all artefacts and display cabinets. Remember how organised and professional our display space used to look (just check on the home page if you don’t) well now it looks like this and it’s all rather dispiriting at present. 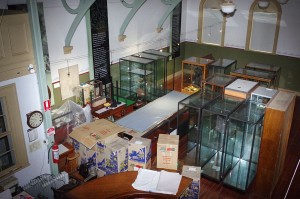 Everything safely packed and stacked 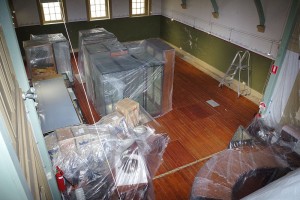 Many square metres of plastic film has been draped over and around the packed items. 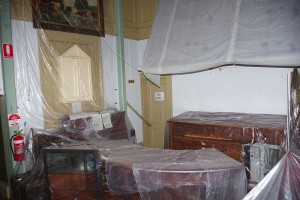 Packing and wrapping was a barrel of laughs (not) and quite challenging but thanks to our team of wonderful volunteers we now have a display area which looks like it has been visited by Christo (the artist who likes to wrap things). 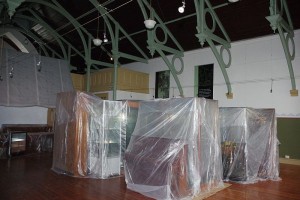 Naturally the Museum will be closed to the public until the interior onsite work has been completed and the debris cleared. We will then assess the situation, re-establish the displays and reopen to the extent possible as soon as possible. The brick walls will need to remain exposed to the air for several months while they dry out, and any future replastering will be dependent on the building’s manager (Mount Alexander Shire Council) securing further funds. Thus future visitors should expect to see our exhibition against a backdrop of ‘naked’ brick walling and the distressed remains of decorative plasterwork. The History Research Centre remained open as usual.