The banner of the Amalgamated Miners’ Association (AMA) of Australasia – Maldon No. 14 Branch is arguably the most significant artefact in the Maldon District Museum collection. In April 2018 this banner was included on the Victorian Heritage Register in the Heritage Object Category; its registration number is H2384.

The Maldon Miners’ Association Banner is an important historical document and a tangible link between the past, the present and the future. A study of the banner allows us to put the often-told stories of the successful few in perspective with the day-to-day struggles, ambitions and achievements Maldon’s ordinary miners and their families. 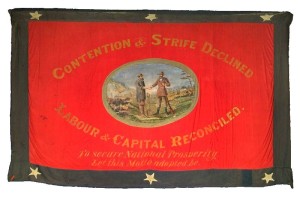 The early miners’ associations of the central Victorian goldfields formed following the introduction of company mining during the 1860s where working conditions were often appalling by today’s standards. These local associations eventually became branches of the Amalgamated Miners’ Association of Victoria (established 1874), and later the Amalgamated Miners’ Association of Australasia (established 1884) which brought together the associations from each colony and both islands of New Zealand.

This banner is one of only two Amalgamated Miners’ Association of Australasia banners known to exist in Victoria, the other is in Stawell. The Maldon banner is unique because it not only remains in Maldon but the streets where it was paraded remain largely as they were.

For many years processional banners were used by trades unions as a symbol of pride and solidarity. They also presented the public face of an organisation, especially at parades. The miners’ associations used their banners at their annual Sports’ Day parades; these days were known as ‘demonstrations’ at the time.

The Maldon association held its first Sports Day in September 1883 and used a banner borrowed from Creswick Branch to head the parade. The branch continued to borrow a banner from Creswick or Sandhurst (Bendigo) until deciding to obtain its own in 1887.

It is not known what happened to the first banner but a second new banner was acquired for the Sports’ Day in October 1888; this is the banner currently on display. Reports in The Tarrangower Times of 3 October 1888 and 6 October 1888 note the banner was personally delivered from Creswick by William Guthrie Spence, Secretary of the AMA in Victoria for use in the forthcoming parade. 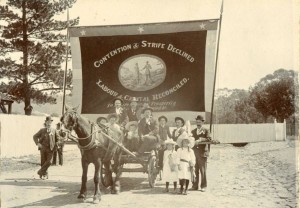 The annual Sports Day was usually an unpaid holiday granted by the mining companies; many stores also closed for the day to allow their workers to join in this important community event.

In the early years many hundreds of people, including many children, all dressed in their best would participate in these processions. By the turn of the twentieth century the attendances had dwindled significantly and these parades eventually ceased.

The banner was later paraded during the annual Easter Fair processions until around 1970. Traditionally Easter is the time when many former residents return to Maldon. The first ‘Maldon Comebacks’ visit was organised in 1917 by the Maldon Fraternal Society (established in 1911) to bring former Maldon residents back to visit their old home after gold mining declined. The Society was finally disbanded in 1974. 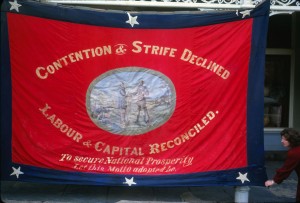 AMAA Maldon No.14 Branch Banner on display in Main Street, Maldon at Easter 1965.

Whoever designed the Maldon Banner decided it should be large (267cm (8ft 9ins) high x 388cm (12ft 9ins) wide). These dimensions are very similar to the Eureka Flag. The overall design is somewhat unusual for the 1880s as it reflects British banner design of the 1830s with an emphasis on words rather than bold images.

Mottoes were an integral part of many banner designs and the Maldon banner is no exception.

One side of the Maldon banner commemorates the local branch members’ aspiration to work together in the interests of all. The central cameo depicts a labourer and capitalist shaking hands in apparent agreement and the motto ‘CONTENTION & STRIFE DECLINED: LABOUR & CAPITAL RECONCILED. To secure National Prosperity – Let this Motto adopted be’ spells it out. This aspiration was soon tested by the economic downturn and industrial action of the early 1890s. 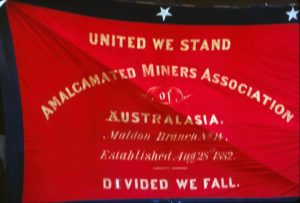 AMAA Maldon No.14 Branch Banner (reverse side) on display in Main Street, Maldon at Easter 1965.

The other side observes the unionists’ credo of solidarity; ‘UNITED WE STAND – DIVIDED WE FALL’.

Politicisation of the unionists led to the formation of colonial labour parties, and later the Australian Labor Party.

The Banner’s manufacturer is not known. Analysis done during conservation revealed the banner to be machine sewn and comprised of a mix of cotton and wool fabrics set in double layers. The central field of red-dyed cotton twill includes an appliqued cameo, hand-painted in oil on canvas, on one side and mottoes in gold lettering on both sides. 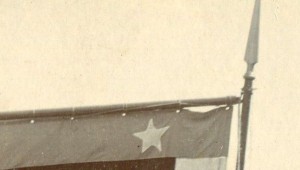 The border of blue-dyed wool includes three white/cream wool stars appliqued on both the top and bottom borders of both sides; a total of twelve stars.

The double-sided banner was designed to be suspended from its upper edge on a horizontal rod and thus viewable from both sides. When on parade the horizontal rod was supported by vertical rods in combination with supporting stays and rigging.

The banner is currently displayed lying on a purpose-built support structure with only one side of the banner visible. The banner is kept covered while not on display to protect it from dust and excessive light exposure. 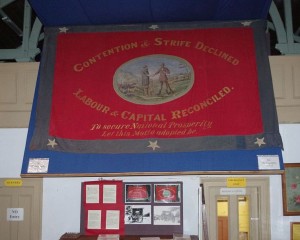 Banner on display, January 2016. Protective cover is visible at the top of image.

Custodianship was transferred to Maldon Museum in the 1970s.

The banner is in very good condition after stabilisation in 2000 and conservation treatment in 2003. A policy of minimal intervention was applied and the rough repairs and patching carried out during the life of the banner have been preserved as part of its history.