The Costume Collection held by Maldon District Museum is quite extensive and includes everyday and special occasion items of apparel and accessories from the mid-19th century to the mid-20th century.

One such special occasion costume is the wedding dress of Kate Dabb, third daughter of Samuel and Catherine Dabb, prominent Maldon pioneers. Generously donated by descendants of Kate and her husband Alf Meyer, this beautiful dress harks from a time when Maldon was at the peak of its gold-driven prosperity. 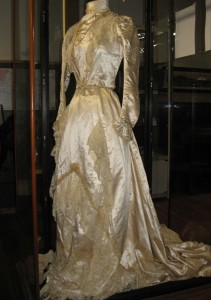 She wore a pretty wreath of orange blossoms, over which was neatly arranged an embroidered veil held in place by a coronet of pearls”.

Late Victorian wedding dresses usually had a demi-train and large sleeves, but no bustle, as in Kate’s dress. Like hers, they were often in two separate parts, a skirt and detached bodice. 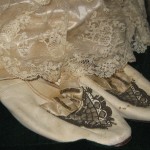 They were worn with white kid gloves and white slippers with little heels. If you are in the museum viewing this artefact, look closely at Kate’s silk stockings; they are quite well worn, with considerable mending – perhaps she wore these for good luck as “something old”.

Kate and her mother presumably planned Kate’s wedding with care and attention to the wedding etiquette and customs of the day. We have learned from the detailed descriptions in the two Maldon newspapers of that time, how elaborately it was done.

The day chosen was Wednesday 6th June, 1900. A Wednesday was considered  “the best day of all” and June an auspicious month, having been named after Juno, the Roman goddess of marriage. Other good-luck omens such as the wedding carriage drawn by white horses, the Wesleyan Methodist Church festooned with flowers and a huge six foot horseshoe above the aisle were noted in the “Maldon News” on the 8th June, 1900.

Kate was attended by four bridesmaids – her unmarried sisters – as well as “three little misses” – the daughters of her two married sisters, as flower girls. The bride and bridegroom’s mothers were “very handsomely robed in costumes of black Broché silk with jet trimmings.” Unfortunately the newspaper reports do not mention the attire of any of the male members of the entourage.

“After the ceremony, the wedding party returned to their carriages amidst a shower of rice” and were escorted to the bride’s home, “Mt. Hawke”, in Adair Street, Maldon for a dainty wedding breakfast for about 40 of her relatives and most intimate friends.

The newly weds, Mr and Mrs Alf Meyer, were later driven by carriage to Newstead, where they caught the evening train to Ballarat, en route to Adelaide for their honeymoon. The bride wore “a pretty fawn costume with a toque (narrow-brimmed or brimless hat) to match”.

Alf and Kate were fortunate to have a large, house built for them in Adair Street, on “Hospital Hill”, Maldon where they eventually raised four children: Samuel, Gavan, Frank and Catherine, known as Molly. When a cellar was being excavated for this house, four months after the wedding, a workman struck gold. Alf, along with his associates, immediately applied for a private property lease to sink a shaft and work the claim. It is unclear how much gold was obtained from beneath the Meyers’ house.

Alf Meyer worked for his father-in-law, Samuel Dabb, in the successful general and produce store businesses of Dabb & Co, in Main Street, Maldon. Like many other successful merchants in town, Dabb also had extensive interests in the gold mines.

Unfortunately, Kate’s father Samuel, had died suddenly two years before her marriage. Samuel Dabb, along with many other members of his extended family, contributed greatly to the richness of life in early Maldon.

Dating of the artefact was straight forward as it is fully described in newspaper reports of June 1900. Unfortunately the museum has no information about who designed and made the dress, or the accessories.

Custodianship was transferred from Phoebe Callow and her mother Elizabeth Meyer to Maldon Museum & Archives Assoc. Inc. by donation in December 2014. The Association thanks them for their very generous donation of this beautiful and socially significant artefact.