This painting View of the Market Place and Court House, Maldon was painted by Henry J.C. Mitchell c.1864. If you are viewing the painting in person you are standing inside the building in the centre of the painting.

The painting is a relatively small (54cm x 69cm) representational work in oil on canvas depicting Maldon’s developing townscape c.1864. The artist’s use of naturalistic colour quietly brings the scene to life. 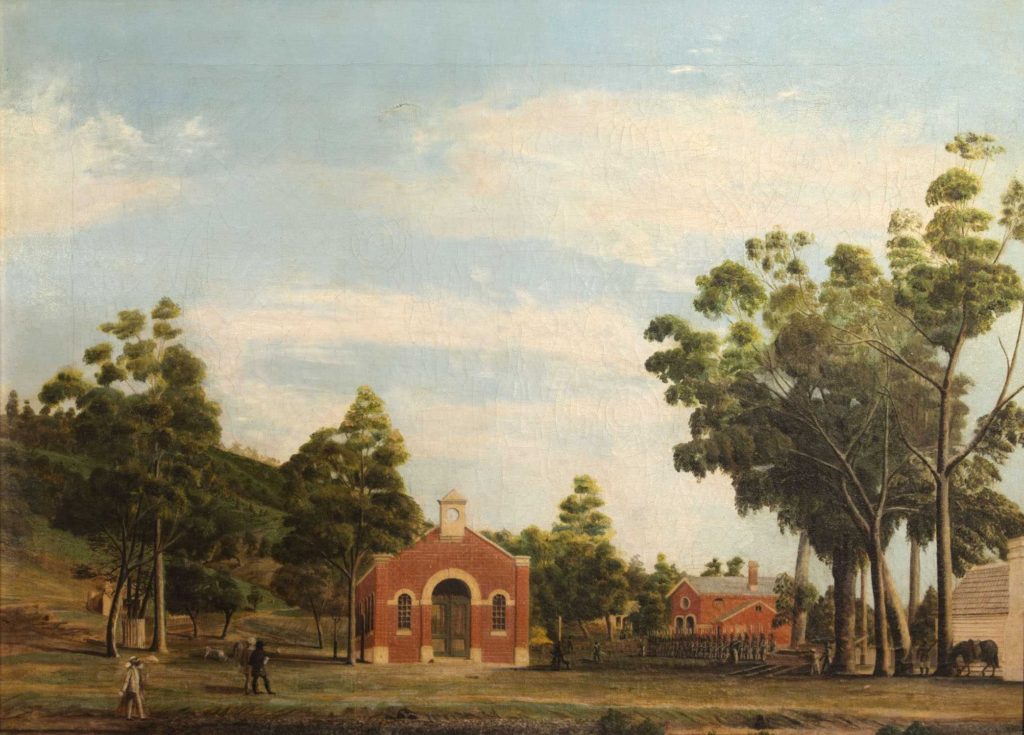 In essence the painting captures an important moment in the transition of this area from gold rush government camp to permanent civic centre. The painting also provides a rare record of the surrounding topography and indigenous woodland prior to its alteration as the town grew.

The artist has portrayed the new developments as a small part of a much broader landscape dominated by the vast blue sky of the central Victorian goldfields. The Market Hall c.1859, the weatherboard Town Clerk’s and Surveyor’s office c.1858, the Court House c.1861 and members of the Volunteer Rifle Corps on parade, along with citizens admiring the scenery, all sit within the landscape depicted.

It is also the only known depiction of the former Market Hall prior to its conversion to the Maldon Shire hall and offices in 1865. The public reserve still exists and the market hall and court house remain situated amidst the gardens and sporting grounds that have gradually developed since the 1860s. 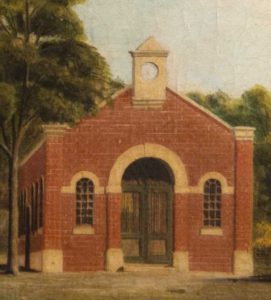 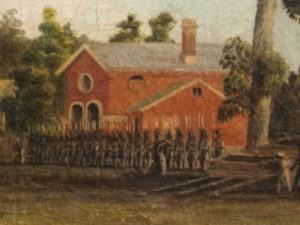 In the short time between 1858 and 1864 the market place evolved from grand idea on the drawing board to a single and largely idle structure. In 1865 Maldon’s recently appointed Shire Secretary, Henry J.C. Mitchell, proposed that the building be converted into a shire hall and offices. At that time the municipal office consisted of a rather humble timber structure situated near the market building and Council meetings were held in a nearby hotel so the proposal was approved.

The artist Henry Joseph Charles Mitchell (1828-1902) was a painter, draughtsman, surveyor and mining engineer who lived and worked in the Maldon area c.1864-67. Mitchell was appointed as the first Shire Secretary for the new Shire of Maldon in 1864. While employed in this position in 1865 he proposed the conversion of the failed market building to a shire hall and offices.

For many years this painting was referred to as ‘The Drape Painting’. It is unknown how this error in attribution to D.R. Drape came about except to conclude that this work was lumped together with others by Drape without investigation.

The attribution was corrected in 2011 after a descendant of H. J. C. Mitchell approached the Maldon District Museum with further information about this painting and subsequent research revealed mention of Mitchell and this work in The Tarrangower Times of 9 December 1864.

D.R. (David Relph) Drape (1821-1882) was a stained glass artist and architect who arrived in the Colony of Victoria, and subsequently Maldon, in late 1858. During 1859-60 he produced several water colour and pencil images of development in the area. He returned to Melbourne in 1863.

Dating of the work is based on the buildings illustrated; the Court House was completed in 1861 and the Market Hall converted to Shire Offices during 1865, and its mention in The Tarrangower Times newspaper of 9 December 1864.

Custodianship was transferred from the former Shire of Maldon to Maldon Museum & Archives Association Inc. in January 1995. The work is in good condition having been restored in recent times.