In May 1916, the Maldon Progress Association was re-formed to improve the surroundings of the town as well as to plant trees to the memory of Pioneers, Maldon residents and some of the Maldon soldiers killed in WW1. They decided to rename Garfield’s Hill “Anzac Hill” and to set about 21 acres aside as a reserve.

Families paid for a wooden tree guard, which enabled a tree to be planted in memory of the person or family they nominated. In June 1916, a plan was drawn up which had 3 sections of planted trees:

Anzac Avenue – a zig-zag pedestrian track from Spring Street upwards. This was to be in honour of residents, families and Pioneers of Maldon and district.

Anzac Circle – a circle of 32 trees linking the two tracks. Later this was doubled and the two circles commemorated WW1 soldiers who had died or been killed in action.

The rest of 1916 and much of 1917 was spent by volunteers digging holes and making tree guards. Also smoothing tracks and filling in small mine shafts.

Some of the first trees were planted, mainly by Rev. Rule Jones, the Maldon Methodist minister. He eventually planted most of the 150 trees on Anzac Hill.

On Sunday August 12 1917, a Memorial Service with about 2,000 people was held on Anzac Hill. It was not until November 3rd, 1917 that Anzac Hill was officially opened. There were speeches and a competitive Hill Climb for cars and motor cycles, from Spring Street upwards to Anzac Circle. From that time a Hill Climb, albeit on Mt Tarrangower, has featured prominently in our Calendar of Events.

At the Armistice in November 1918, the “Tarrangower Times” published a list of about 470 men and women from Maldon and District who had served. Of these around 80 died, about 60 of whom are honoured on Anzac Hill. Starting in December 1918, after the Armistice, a series of Welcome Home Dinners was held for returning soldiers. These continued into 1919, as the men reached home.

Throughout these years, the issue of Conscription occupied the lives of many in Maldon. Two distinct groups emerged: those “for” and those “against”. Heated meetings were held and letters written to the local papers. Throughout this time, the protagonists often worked in harmony to complete the Anzac Hill project – a unifying endeavour for the townsfolk in time of War.

In 2018, more than 100 years on, Anzac Circle was replanted by Maldon Urban Landcare (MULGA). This time the trees will be the more hardy, local Yellow Gums. Sadly quite a few were impacted by dry conditions and further replanting was required in 2019. One wonders how they will be faring 100 years from now, when the flag is lowered on Anzac Eve and the bugler plays at dusk on Anzac Hill.

The soldiers of Anzac Circle

Anzac Hill is a special place where all of these soldiers can be remembered and their sacrifice recognised.

The thirty-two soldiers listed below are remembered by plantings in the inner circle. The number against each name corresponds to the tree tag number in the circle. 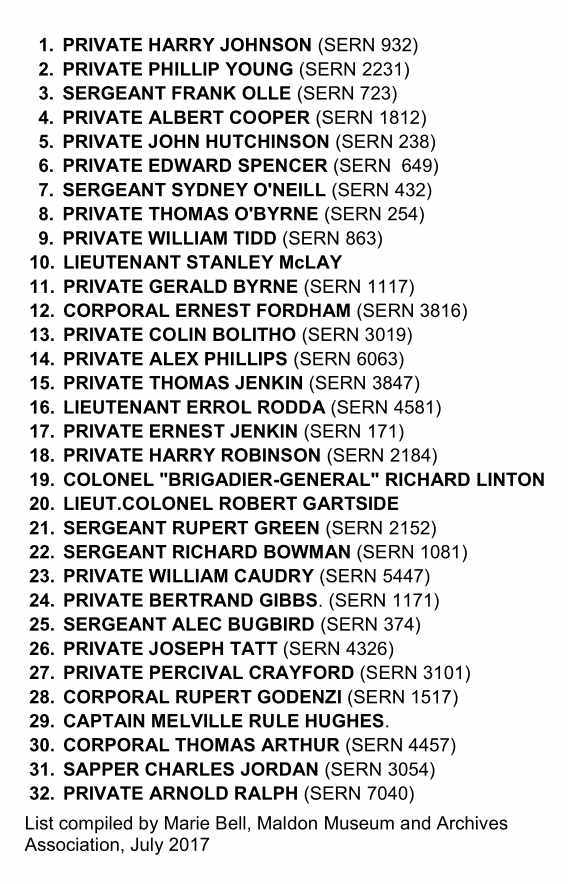 Names and notes on those remembered in the outer circle are yet to be completed.